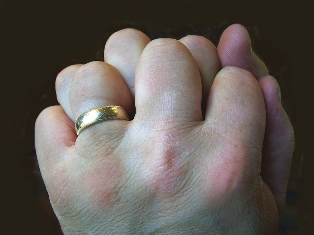 Though urban legend claims there’s a connection, no evidence has yet supported it

If you don’t actually do it yourself, then you’re at least aware of the familiar sound of knuckle cracking (KC). Whether it’s relieving to your hand’s joints or irritating to your eardrums when neighbors do it, KC is often around in some form or another, and along with it, the urban legend that it’ll lead to arthritis of the hand joints if done in excess. In order to attend to this claim, the exact dynamics of what happens when knuckles “crack” should first be explained. In short, when a joint is first extended with pressure meant to crack a knuckle, gases that have dissolved in synovial fluid (which keeps joints slick) form microscopic bubbles that coalesce into larger bubbles. Once enough pressure is forced upon the joint, the larger bubbles collapse back into microscopic bubbles, which creates the characteristic cracking sound. Anywhere between 25-54% of the population cracks their knuckles, and many times the behavior becomes habitual because of its immediate relief on joints. Osteoarthritis (OA) is the wearing away of articular cartilage, which protects bones from rubbing against one another, and the claim with KC and OA is that the repeated force on joints can indeed thin down articular cartilage and lead to hand OA; however, the claim has not yet been supported in medical literature. Since OA is such a major concern and because effective treatments are lacking, any potential risk factors warrant further investigation. Therefore, a study was conducted based on the potential connection between KC and hand OA.

Among the known risk factors of hand OA are prior joint trauma, family history of hand OA, history of heavy labor involving the hands, and most prominently, aging, with 22% of the general population between 71-100 suffering from it. Therefore, adults between 50-89 who had an X-ray in the past few years were sought for the study due to their elevated risk. After screening records for potential fits, a total of 329 patients were deemed eligible for the study and sent surveys regarding their condition, of which 215 responded (135 patients with OA and 80 who didn’t have it, used as controls). All participants were given questionnaires asking them about their knuckle cracking behavior, specifically if they cracked knuckles regularly, how often they did so, and on which knuckles. Participants with hand OA were additionally asked about the presence and duration of their symptoms. Results from the questionnaire were then collected and analyzed to evaluate the KC/OA relationship.

Of the 215 participants who responded to the survey, a total of 43 (20%) reported that they cracked their knuckles, and men were more likely to crack knuckles than women. The prevalence of KC among the controls was 23%, which was not significantly different from the prevalence in those with OA, which was 18%. Another analysis of data looked into whether the frequency of knuckle cracking had anything to do with OA, but even the participants who cracked their knuckles the most didn’t show any more of an association with hand OA. In an attempt to determine which came first, KC or OA, results showed that the duration of KC was significantly greater than the duration of OA symptoms. A final analysis evaluated if the factors KC, age, sex or family history of OA were shown to contribute to OA, and only family history of OA and age showed an association, while KC and sex did not.

Based on these findings, it appears there is no proven association between knuckle cracking and hand OA. None of the analyses showed any sort of connection between the two, and the control group reported knuckle cracking at a similar frequency to the OA group. This is not to say that cracking your knuckles is completely healthy for hand joints and that it has no side effects on joint health in the long term, as it is possible for the act to cause some form of damage not yet discovered. With this study, however, it can be concluded that habitual KC for persons 50-89 doesn’t appear to be a risk factor for hand OA, and those who do it regularly can perhaps rest a bit easier.